I GREW UP IN A SMALL TEXAS TOWN called Decatur not that far from Ponder, where my first book, Playing Dead, is set. Before I could drive and kiss boys, my chief entertainment in July and August was walking in 100-degree heat to the small, historic stone building that had been converted into a library by the sheer enthusiasm of its literary citizens. The librarian was the mother of one of my good friends, a very cultured woman who kindly looked the other way as I loaded up with the ten Harlequin romances that my cat and I planned to spend the weekend with. Fantasy was important at that time in my life. In real life, I changed the color of my barrette and knee socks every day to match whatever outfit I wore to middle school. I was described as “pleasingly plump.”

I filled my diary with fond thoughts about a sweet, handsome boy I passed in the hallways (who was gay, it turns out, and just as wonderful a person as I imagined). Eventually I grew taller, thinner, cut my hair, picked up some mascara, and attracted a boyfriend named Bubba. Santa Claus put Anna Karenina under the Christmas tree. I started pulling the old paperbacks off my parents’ shelves: Steinbeck’s The Pearl, Imperial Women, The Godfather, Agatha Christie. My librarian nudged me toward worthy heroines: Anne Frank, Josephine March, and the nameless narrator of Rebecca. 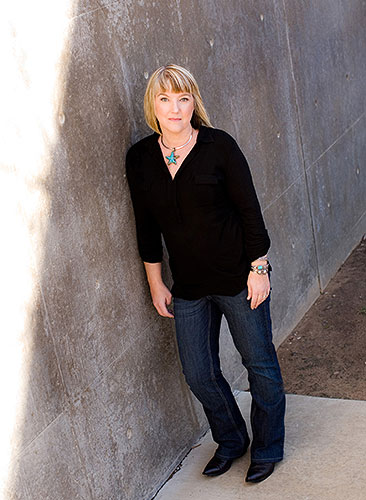 Shortly after visiting Manderley, at 15, I dreamed of writing my first thriller. Seven years later, I became a journalist, with no regrets. I learned more about writing, evil, and wicked surprise than I ever would have otherwise. In mid-life, with my husband’s cheerleading, I quit my job, cut my family’s income in half, wrote two novels and encountered the rejection of every major New York publishing house. I almost gave up. I’d lost the ego that had been my steady companion as a journalist. Once again, I was that insecure girl in middle school trying to match her knee socks to her hair clip.

My publishing career has been a big messy soup of joy, frustration, and learning. Along the way, I figured out who I am. No matter how gritty my theme, I can’t write a book without hope and humor. I want deeper ideas roaming my plots—cutting-edge forensic science, the death penalty, date rape, and dementia, to name a few. I like to play mind games. There are dark things inside me I didn’t know about. And I will never forget where I came from. The citizens of Decatur, Texas, who put together that little stone library book by book? They expanded their literary soul, building a new home that was nominated by the Bill and Melinda Gates Foundation as one of the best small libraries in America. And those Harlequin romance writers, some of whom were clearly frustrated literary novelists? They taught me a hell of a vocabulary—and that heart is critical to every good book.

Julia Heaberlin is the internationally bestselling author of six thrillers, including Night Will Find You, We Are All the Same in the Dark, Paper Ghosts, and Black-Eyed Susans. Her books have sold to more than twenty countries and have been optioned for film. We Are All The Same in the Dark won the 2020 Writers’ League of Texas award for Fiction, and Paper Ghosts was a finalist for Best Hardcover Novel at the International Thriller Awards. Before writing novels, Heaberlin was a journalist for the Fort Worth Star-Telegram, The Dallas Morning News, and The Detroit News, which fed her interest in true crime and the forgotten stories of victims, a theme she carries into her fiction. She currently lives in the Dallas/Fort Worth area with her family, where she’s working on her next psychological thriller.

BBC RADIO: RADIO 2 BOOK CLUB
The legendary BBC broadcaster Simon Mayo and his panel of reviewers chat up Julia about Black-Eyed Susans during England’s drivetime. (Fast forward 1 hour and 8 minutes for the interview.)
Listen to the interview

KERA PUBLIC RADIO’S “THINK” PROGRAM
Krys Boyd of KERA public radio’s “Think” talks with Julia about how to build a mystery and the forensic and death penalty experts who inspired Black-Eyed Susans.
Listen to the interview