Stranger on the Bridge

Welcome to an eerie piece of 800-word microfiction. Don’t peek at the surprise ending. It’s only seconds away. 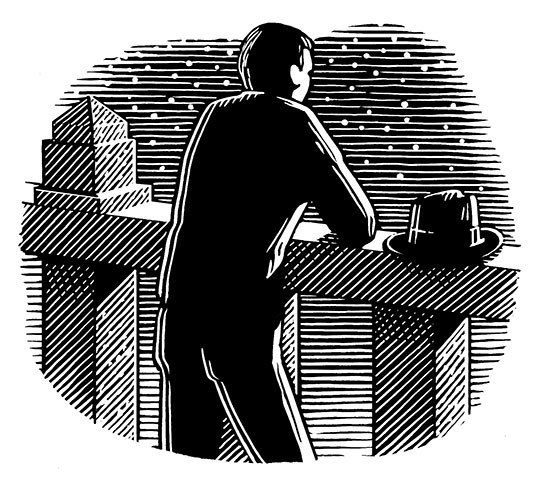 “It sounds like the sea, doesn’t it? When you close your eyes? I love the sea.” The words float at me out of the dark. Feminine. Breathy.

I wonder if I’m imagining her voice over the rush of traffic on the LBJ Freeway below. But when I turn, there she is, a slender shape in the shadows of the bridge, a few feet from me. She’s taking off her heels, placing them neatly beside her. She tucks her skirt underneath her on the filthy concrete and sits with her arms wrapped around her knees.

I can make out a dark flip of hair, a delicate profile. The lights are out on this patch of the highway, which is why I picked it.

She’s young, I think, maybe early 30s. Too young to die. The fog of whiskey is lifting in my brain, defining the edges of the night. I don’t want to worry about saving her. She can only be on this bridge for one reason. The same reason I am.

I gesture to the noise below. To the spot I’ve been staring at for two hours. “You can put your shoes back on. This is a solo mission.”

“You need to pick another night.”

“A son, Patrick.” The tremble in her voice begins to work on me. “A husband, several months after that. I thought about killing myself a lot. I drank. Had nightmares all the time. But I have had lots of happy moments, as well. Every moment one lives is different from the other. The good, the bad, hardship, the joy, the tragedy, love, and happiness are all interwoven into one single, indescribable whole that is called life. You cannot separate the good from the bad.”

“A little hackneyed, don’t you think? I can say that because I’m a poet. A poet and a drunk, my wife would say. Bet you
haven’t read a poem since sixth grade. Most of America doesn’t give a shit about poetry. ”

“I’ve read everything from Colette to Kerouac. I read every day. People read.”

The silence stretches. She is going to make me explain. Think twice. Confess.

“You want to know why?” Now it’s my voice trembling. “Every day, I feel devalued. As an artist. As a human being. Every night, I pick up a bottle and watch the news. Will there be nuclear holocaust today? Tomorrow? I used to believe that underneath all our crassness, all our selfishness, people are good. That, in the end, we will do the right thing. But that little safety bar on the roller coaster? It’s gone.”

She gives a hoarse laugh. “My husband used to say that it was insane that two men, sitting on opposite sides of the world, should be able to decide to bring an end to civilization.”

“I understand that the world has been on the brink before. That Americans care about their past, but for short-term gain they ignore it and tear down everything that matters. I also believe just as much that one man can make a difference and every man should try. My husband believed that. He was … magic. He believed in art, in mankind, in the future. In that innate goodness you’re talking about. He said only dreamers can save us from the cynics, the cold realists.”

I try to bat it away, but a poem is whispering, already writing itself in my head. “The traffic does sound a little like the sea,” I say. “Tell me again how you ended up on my bridge?”

“ It’s one of my favorite poems.” The woman is rising. Slipping her shoes back on. “Poets are the ones who change the world. You must continue.”

She’s leaning over the edge, staring into the abyss of people and hurtling steel that is no longer calling me tonight.

I think she’s going over.

I stumble to grab her. Nothing but air.

Only then do I see the pink suit. The blood.

Let them see what they’ve done.

She holds out her hand to me.

Author’s note: A number of quotes in this fictional piece can be directly attributed to Jacqueline Kennedy Onassis, including her belief that poets are the ones who change the world. “If I can stop one heart from breaking” was one of her favorite poems. Two of her children died, one stillborn and another only two days old. Jackie moved their graves to Arlington Memorial Cemetery beside their father’s almost immediately after the assassination. After the Cuban Missile Crisis, JFK did say in a White House meeting that it was insane that two men on opposite sides of the world could control the fate of mankind. She would have been 98 this year.