The Texas Death Penalty and Me

As research for Black-Eyed Susans, I stood outside the Death House in Huntsville while a man was being executed. I didn’t expect for it to change me—to turn into a night I will never forget.

Everything quivers. The trees, the grass, the birds. The ribs in my chest, the balls of my feet. The air, brittle with chill and death even before the thundering noise began. I feel like I am about to explode from the inside out. 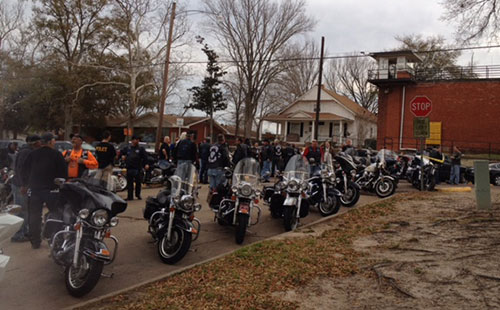 ople ask me what it is like to stand outside the Texas death chamber while a prisoner is being executed, this is what I remember first. The man executed that particular night was Edgar Tamayo, a Mexican national who shot a Houston cop three times in the back of the head.

The terrible sound was the revving of motorcycles from the nearly two dozen retired police officers parked as close to Edgar Tamayo as they could get. They demanded that he hear the guttural protest of their motors through the walls as the needle was going in. Kill him, roared the motorcycles. Kill him.

And make no mistake, Edgar Tamayo, his family, and the witnesses he chose, could hear.

It is easy to stand only yards away from the tiny, nondescript room in Huntsville, Texas, that is the busiest execution factory in the United States. Since 1982, my state has killed more than 525 prisoners. The death chamber is housed on the corner of “The Walls,” a historic, friendly looking prison with a green area and a clock tower. In Texas, executions have been performed by rope, poison and electricity for almost 200 years. The Walls unit sits in the middle of town a few blocks off the quaint square.

There is a barbecue grill on the front porch of the white frame house next door, and an old neighborhood stretches out beyond it. Within sight of the walls, while men die, people are munching on pie and chicken fried steak at the best restaurant in town. They don’t mean anything by it; it’s a matter of routine. Back when the electric chair was used, the lights of the whole town used to shiver when the executioner flipped the switch. If the town folks who live here don’t work for the prison system—seven sprawling units in all— their parents probably did or their grandparents.

Sometimes, I take my mind back to the night of Edgar Tamayo’s death. Survey the scene. On that night, and most execution nights, the screaming politicians and social media fanatics are far from the town of about 40,000 in the piney woods of East Texas. The crowd I’m with is small, mostly Hispanic. Two beautiful Mexican TV reporters are brilliant stars in the dark, illuminated by camera lights, one in a brand-new purple tie, another in bright red lipstick. Mexico, despite its ongoing battle with corruption and brutal cartels, is anti-death penalty. The government is vigorously protesting the execution of one of its own on our soil. 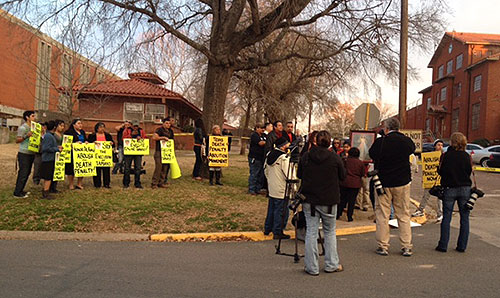 A group of mourners kneel by Edgar’s picture and sing, their mouths opening and closing like birds. Gloria, who runs a straggly group of regular, vocal protesters, chants through her bullhorn that an innocent man is about to die even though he is not innocent at all. Some of them hold signs that declare Rick Perry a serial killer (279 people were executed during his time as governor).

Another group of five men and women, all white, all older, weigh down a street corner. Most of them make the drive from Houston to as many executions as they can. They come not to yell but to be present for the family of the executed. On the coldest nights, the most stalwart, a criminal justice professor in Huntsville, stands by the Stop sign alone with his battery-operated Christmas candle until the family of the executed walks out the door. He is tired and cynical and understandably does not want to talk much. He has been talking to tourists like me forever.

The whole thing is so banal. So efficient. Everyone here knows where to be. The pros are on one side of the building, the cons on the other. The Texas troopers wandering around don’t expect trouble. The execution process usually starts at six, is done by seven, although tonight is going long.

Legendary Texas death penalty lawyer David Dow says he doesn’t mean to be flip when he speaks a truth: “Killing people is like most anything else; the more you do it, the better you get. If killing people were like playing the violin, Texas would have been selling out Carnegie Hall years ago.”

Ice starts to fall. I re-examine why I am here and why I have not been here before. I am writing a novel, a story meant to entertain. I showed up out of convenience, curiosity and a desire to be authentic in my book.

I had casually Googled the Texas execution schedule two months before: Should I pick the woman who helped a group torture and murder a mentally ill man for his life insurance? The man who ate the doughnuts and breakfast tacos that he ordered after beating the delivery woman with a baseball bat? A boyfriend who repeatedly stabbed and killed the married woman he was sleeping with and her daughter and three-year-old grandson? A guy who kidnapped a young Houston couple, raped the woman and then killed them both?

In the end, I picked Edgar, and so we were united. The day of his death fit into my schedule. I asked a friend to come with me. We chattered and ate sour gummies and red licorice on the three-hour ride from Dallas to East Texas. We booked at a lovely bed and breakfast only a few blocks from the Death House.

I am horrified as I write that last paragraph. 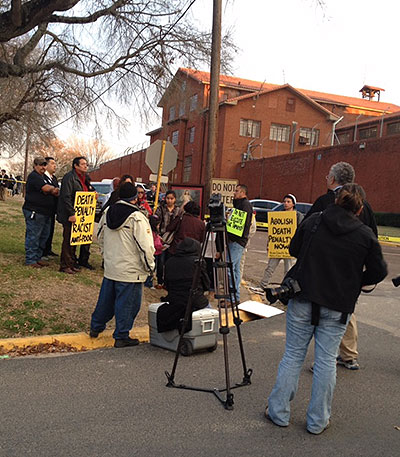 I was raised by a woman who gave spiders a free ride out of the kitchen on a newspaper. There was no death penalty in our house. I was a sensitive kid who didn’t believe my God would send anyone to hell. I couldn’t stomach violent movies, much less the barbaric concept of it being legal to kill someone. As I grew older, I was further shaped by intellectual reasoning—that the death penalty is part of a racist and unfair system. I protested by voting for candidates who believed as I did.

Then came Edgar Tamayo. The roar of motorcycles. The victim, Guy Gaddis, a 24-year-old police officer, two-and-a-half years on the job. He left an expectant wife behind.

When I arrived back home, the experience began to shape my story, my characters, in ways I didn’t plan. I poured out a chapter I feared my editor would cut entirely.

She never touched a word.

The lawyer, so important to this part of the story, sprang to life.

Tessa, my heroine, would not cooperate. She was conflicted about the death penalty no matter how much I tried to convince her otherwise.

How can you know how I feel, she asked me, if you’ve never experienced something this terrible? If evil hasn’t ripped out a staggering piece of who you are?