Once upon a time, when I wrote this essay, I was a Psychotic Baseball Mom. My son—now in medical school, not a Red Sox pitcher—turned out quite all right anyway. And I am almost fully recovered.

(Originally published in the Fort Worth Star-Telegram, 2011. Illustration by Mark Hoffer.) 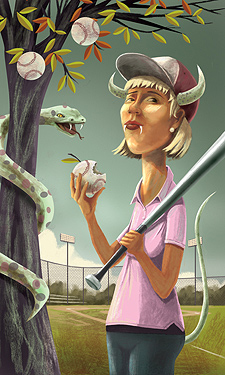 My friend Cindy says that at the beginning of every fall season, every spring season, every summer season. Every time she scrubs red dirt out of baseball pants, every time her son adjusts his cap and grins, every time he steps to the plate even though he is known for blasting the ball out of the park.

Cindy and I are baseball moms, a special psychotic breed. We started out as nice people. In fact, we are mostly nice people. Until it comes to the world that revolves around that little white ball.

It is tough to watch your child fail publicly for years. It is tougher to know that the law of baseball physics makes it a sure thing.

So we bow our heads in the stands, shut our eyes and pray harder than we do in church. We know way too much about the hieroglyphics of the scorebook, the fine points of the balk. We race to see Moneyball for something other than Brad Pitt and snap up the poignant new baseball novel The Art of Fielding because that writer understands.

One mother I know mutters under her breath when her son picks up his bat. “Get a hit, get a hit, get a hit.” Another is a pariah, in a special place reserved for the worst of us baseball moms because she openly points out the errors of everybody else’s child. Baseball has been like sandpaper to her soul, eroding her social skills. Yet another is seething in the corner, angry that her son is still on the bench, already texting the coach, possibly a preview to telling him she wants her money back. This past summer, she paid $1,500 for the privilege of seeing mostly the tip of her son’s cap in the dugout.

Our son, Sam, is a junior in high school. He has played since age 6, blessed with a loose left arm. My husband and I have always tried to be patient, to take the high road. To not second-guess the school or select-team coaches too much or play any kind of politics. But somewhere along the way, my husband stayed on the high road and I started rolling down the hill into the mud.

We sat at a scrimmage the other day and he began to comment positively about a player who competes with our son for playing time.

“We are not here to be kind to others,” I said, only half kidding.

My friend Laura, a good Baptist whose son now frays her nerves as a college player, warned me about this moment, when things turn. When you are tempted to root against other kids. Nice kids. On your own team.

I know that the demon seed inside me was planted a very long time ago.

Sam was 8 and standing on second base. We were getting slaughtered.

The opposing daddy-coach was arrogant, handsome, tanning-bed brown, wearing ridiculous tight baseball pants that surely were causing stress to his private area. But suddenly, there was hope for less humiliation. Their catcher overthrew the ball into the field.Confusion.Tight Pants is yelling, his players in their bright kelly green uniforms are yelling, their parents in the stands are yelling, waving their glittery kelly green pompoms. Get the ball!

My son takes off from second to third, and the shortstop immediately pulls out the ball from behind his back and tags him. A trick play. My son is out.

Did you get this? The kids were 8 years old. There were glittery green pompoms. Even the parents were in on it. I didn’t do anything rash, even though my son had tears in his eyes.

But my stomach hurt.

Flash-forward 10 years. My son is now a left-handed pitcher standing on the mound on a hot, dusty junior college field that resembles a burned-out war zone. I can’t remember the last time I saw him cry. The hundreds of games that have come before are a blur of dust and sweat and irrelevance. This is what matters.

The kids on the other team are out of the dugout and on the fence.

Every time Sam starts his pitching motion, they scream,”Riiiiiippppppp,” ostensibly cheering their player on but really trying to bother the heck out of my son, to send that ball off course.

This goes on for every pitch for three batters, before I blurt out to no one in particular: “Is that legal?” Like those boys could be dragged off to jail.

“Yep,” says the father above me, spitting out a sunflower seed. “Part of the game.”

Three innings later, I can barely keep still. We’re behind by 2 runs.

The riiiiiipppppp is louder, more guttural. Sam is angry. The set of his face, his body language between pitches. Nothing obvious, but I know. He rolled around in my belly, after all. I’ve spent 11 years gauging his happiness on the baseball scale, knowing the split second in a game that will determine his mood when it’s over.

When Sam leaves the mound, the kids on the fence take on the next pitcher. It’s nothing personal.

I turn to a more sympathetic audience: the psychotic baseball mom sitting six inches away. She’s a pro. Her daughter played third base on a championship high school softball team. Her older son, a catcher, pitched in college when his coaches figured out that the speed at which he was throwing the ball back to the pitcher was faster than the pitcher’s throw.

Her last baseball baby is in the dugout with my son, probably the first one to say something encouraging to him when he came off the field because the woman sitting beside me has raised him to be one of the nicest kids I know.

“This is completely classless,” I say to her. “Sam is out of the game now. It’s not about my son anymore [a psychotic baseball mom lie]. I’m going over to those parents.” I gesture to a small, silent group in the stands. “I’m going to ask how they can be on a team that behaves this way.”

“No, you’re not,” she says, while the boys continue to chant. “But they’re acting like girls.”

Fifteen minutes later, she turns back to me. “If I were our pitcher,

I’d hit that kid at the plate with the ball. He’s thrown the bat at our catcher twice.” I stare at her. “So you don’t want me to go talk to the parents but you’d injure a player?”

“Just in the arm,” she says cheerfully. “Nothing too bad.”

God help us, these are the things we talk about. It might not be legal.

Our pitcher didn’t hit the kid. We won the game in the last inning with a little help from karma. One of the taunters made an error. Afterward, Sam said that the heckling didn’t bother him but that the ump should have called his curve ball. He was, um, mature.

When I’m in a plane, it never fails that I stare down through the clouds and see countless green patches, perfect little diamonds where hundreds of thousands of kids all over the United States are enduring the same things. They come with hundreds of thousands of psychotic baseball moms all wanting the same thing. For our children to know that the world hasn’t ended just because the bat did not touch the ball or a ball slipped out of a glove or a coach made a careless remark. That they will feel the joy of the game again.

I ask my son why he loves baseball no matter how much it batters him around, and he answers simply, “For the good days.”

For the triumphant feeling of striking out the side or clearing the bases with a line drive triple.

On his wrist is a red rubber bracelet, the same bracelet encircling the wrists of many of the kids on his team. It is not a tribute to something abstract. It honors the memory of a player from their high school diagnosed with bone cancer the summer before he was supposed to head off to Texas A&M. Sam and his friends were freshmen when this boy was a senior, so they barely knew him. But they touched the same grass, and that is enough. “In our hearts forever,” the bracelet reads. This beautiful, fickle game has wrapped these teammates up and bound them like soldiers. They are always rooting for each other.

So I have learned to keep my mouth shut on the inevitable dark days of baseball. To spread out a horse trough of food when my son comes in the door sweaty and defeated, pat him on the shoulder and let him work it out by himself.

In Chad Harbach’s recent bestseller, The Art of Fielding, a Superman-talented shortstop, Henry, is in a slump and refusing to eat. The shrinks think he has anorexia. But Henry’s best friend, the catcher, knows better: “I told them, only cheerleaders get anorexia. You’re a ballplayer—you’re having a spiritual crisis.”

I guess the spiritual crisis applies to baseball moms, too (except, unfortunately, we keep right on eating). Our boys are growing up, pulling away. Their numbers have been whittled down over the years and now they are the ones left standing on a high school baseball field.

It’s serious. Competitive. Coaches aren’t going to put up with psychotic baseball moms. There are nine positions on the field. They aren’t going to play everybody and they aren’t going to explain why. They are young men, they tell us. This is their fight. Hard work and luck will determine everything. Keep a respectable distance. So I was surprised one day last year when my son’s high school JV coach amiably walked up to me and started a conversation about my son’s pitching. Maybe it was because I was working the concession stand and I handed him free snacks and a drink, but I think it was because he is a good guy.

“I had to laugh when that kid hit a home run off Sam,” he said. “He was so ticked off.”

Really? He had to laugh? He didn’t have to yell? “A lot of pitchers wouldn’t know that was the 9-hole hitter, but, Sam, well, he’s smart. I knew that he knew.”

Later, Sam explained. He had lobbed it in there. It was the 9-hole hitter. The last kid in the lineup. The one least likely to hit the ball. Sam was saving his stuff for the lead-off guy coming up.

“I won’t do that again,” he says. Lesson learned. Don’t judge a book by its cover or place in the lineup.