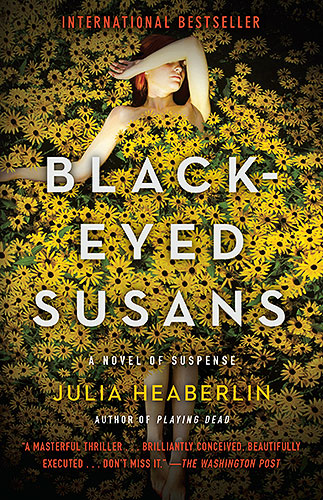 A GIRL’S MEMORY LOST IN A FIELD OF WILDFLOWERS.
A KILLER STILL SPREADING SEEDS.

At 16, Tessie Cartwright was found in a Texas field, barely alive, piled into a half-dug grave with a strangled college student and a scattering of unidentified bones. Tessie remembers nothing about how she came to be there and, for the last eighteen years, has been known in serial killer lore as the surviving Black-Eyed Susan. The media nicknamed the victims for the yellow carpet of wildflowers that flourished in the ditch where they were dumped.

Almost two decades later, the man who was captured and convicted of the murders sits on Death Row about to be executed. A group of Texas lawyers dedicated to turning over unjust verdicts believe his proclamation of innocence, as does a famous forensic scientist. The team appeals to Tessa Cartwright, now an artist and single mother, to undergo hypnosis to retrieve her lost memories and to share drawings she produced in experimental therapy as a 16-year-old. They don’t know that Tessa is hiding a painful secret. For years, she’s stumbled across black-eyed Susans planted in very personal places. Is the real killer still out there, taunting her? The story races back and forth in time, between the teen-age Tessie and the woman she has become, determined to find her memory and the truth.

“[A] gem of a novel . . . richly textured, beautifully written . . . Tension builds, and the plot twists feel earned as well as genuinely surprising.”
—The Boston Globe

“Heaberlin brings her remarkable skills as a reporter and editor to this work, digging deep into fascinating, topical issues for her own research … pulling out only the most interesting facts and details for her readers. But it’s her emerging talent as a masterful storyteller that sets this book apart.”
—Catherine Mallette, Fort Worth Star-Telegram (read the full review)

“A masterful thriller that shouldn’t be missed . . . brilliantly conceived, beautifully executed . . . Both as a portrait of modern, urban Texas, and in terms of suspense, characterizations and storytelling, Black-Eyed Susans is outstanding. . . . The answers are as astonishing as they are finally believable. [Julia] Heaberlin’s work calls to mind that of Gillian Flynn. Both writers published impressive early novels that were largely overlooked, and then one that couldn’t be: Flynn’s Gone Girl and now Heaberlin’s Black-Eyed Susans. Don’t miss it.”
—The Washington Post (read the full review)

“One of LibraryReads’ Top Ten books that librarians are most excited about putting on their shelves: Black-Eyed Susans is perfect for readers looking for something to pick up after The Girl on the Train.”
—LibraryReads

“A terrific plot, matched by the quality of the writing and superbly paced tension.”
—The Times of London (Book of the Month)

“Julia Heaberlin does a neat job of making us care…[she’s] a pro who strengthens her theme of judicial prejudice by referring to the O.J. Simpson trial and by drawing our attention to the morbid regularity of executions in Texas prisons.”
—The New York Times Book Review

“If readers looking for the next Gone Girl do (pick up Black-Eyed Susans), I guarantee they won’t put it down. Because the story—broadly: the only survivor of a serial killer may have helped convict the wrong man, and now she has to track down the real culprit—is a classic page-turner.”
—Zac Crain, D Magazine (read the full review)

“A truly compelling tale of the fragility of memory and elusive redemption.”
—Kirkus Reviews

“An absorbing character study and a good choice for readers who want to really sink into a psychological thriller.”
—Booklist

“Gripping . . . The suspense builds as Tessie uncovers devastating secrets from the past en route to the shocking ending.”
—Publishers Weekly

“Quite clever. I think this novel will appeal to fans of Gone Girl.”
—Shannon Fukumo, LibraryReads (Top 10 Pick of August nationwide)

“Do not start this book close to your bedtime, because it will most assuredly keep you up reading until very late, and then wedge its way into your dreams. Julie Heaberlin has written a spellbinding tale, at once both completely believable and utterly suspenseful. And once you reach the novel’s perfect ending, you will want to read it again.”
—David R. Dow, author of Things I’ve Learned From Dying and The Autobiography of an Execution

“Creepy and utterly compelling, Black Eyed Susans is a shadowy journey to a very dark place.”
—Alison Flood, The (London) Observer (Thriller of the Month)

“Heaberlin has written an intelligent, absorbing and well-researched page-turner that will delight fans of Megan Abbott and Tana French.”
—Daily Express (London)

“The assured telling of this chiller combines to create a very modern Gothic horror that will keep you up way past your bedtime.”
—Sunday Mirror

“Black Eyed Susans is a fine achievement. It drips with authenticity, empathy and dread, meditating on the Death Penalty as well as offering an empathetic study of the life of a survivor. Take note—Julia Heaberlin belongs on every suspense fan’s bookshelf.”
—Mike Stafford, Nudge

“A superb psychological thriller strewn with gothic motifs (Edgar Allan Poe, and particularly his story The Tell-Tale Heart, is regularly referenced), Black-Eyed Susans is a haunting account of Tessa’s painful journey towards understanding the unpalatable truth of her life-defining experience (‘I am sane, and I am not, and I don’t want anyone to know’), which also functions as an engrossing exploration of the morality of the death penalty.”
—The Irish Times

“Woman in jeopardy seems to be the genre of the moment—with books like Gone Girl and The Girl on the Train centre stage. But if you like the genre, look no further. This one is the best yet!”
—Joan MacKenzie, Joan’s Pick, Whitcoull’s, New Zealand (Watch Joan MacKenzie’s full review)

“Original, beautifully written, and psychologically mind-bending—Black-Eyed Susans is the spectacularly dark and twisty story of what happened to one young Texas girl and the ghosts who refuse to let her rest. I didn’t want it to end but I couldn’t put it down.”
—Barry Forshaw, UK crime reviewer

“Black-Eyed Susans is a compelling read, especially for Serial fans.”
—Cosmopolitan UK (which named Black Eyed Susans one of “10 Amazing Books You NEED to read this summer”)

“Powerful … about as good an example of Grip Lit as you could read.”
—Sunday Independent (Ireland)