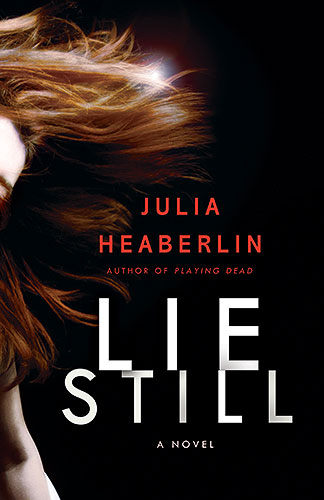 The ring glittered, resting on the dirt of the forest floor, the sun catching it in the fractured afternoon light falling through the leaves.

The ring hadn’t been there the day before. A week of brutal, ceaseless rain finally cleaned it up and washed it from its hiding spot twenty years too late, long after something terrible happened.

A hiker paused when he saw it, nearly turned away, and then recognized it for what it was. Plastic. Made in China. A prize from a gumball machine. He picked it up and briefly examined it. A pink heart-shaped jewel on a small, dulled band. He thought about taking the ring home to his three-year-old daughter, probably strutting around at this very moment in her Barbie princess crown, but he decided his wife would yell at him. Tell him the ring was a choking hazard. His daughter would ask why it was scratched. He dropped it as casually as he had flipped his empty Ozarka bottle into the brush a few minutes earlier and trudged on up the trail.

He didn’t feel the eyes on his back, watching him disappear.

The crow swooped in.

It was the same crow that had been stealing the change out of a broken car wash vending machine a mile down the road. Exactly $57.50 to date, all of it deposited daily into the sawed-out window of Joey Tucker’s pine tree house that he built all by himself that summer. Joey told no one about the money. He thought it was a secret gift from God.

Few people—certainly not Joey or the man in the forest—know how smart crows are.

But the crow was done with Joey. Joey was rich enough. The bird flew through the trees, higher and higher, sweeping through clouds still heavy with water, a tiny black dot, taking his prize with him.

The crow recognized the ring for what it was.

For what it once was.

For me, the rape is a permanent fixture on the clock, like midnight.

A point of reference.

I was nineteen years and four days old.

I remember because he treated me beforehand to a belated birthday dinner of scallops, chive mashed potatoes, haricot verts and a bottle of mediocre wine. I was surprised when my plate arrived and haricot verts turned out to be ordinary green beans.

His name was Pierce Martin, one of those names that could work backward or forward. The sheets were Tommy Hilfiger.

I remember because he pressed my face into the pillow’s red and blue patriotic design to prevent me from screaming.

After my birthday dinner, our third date, he begged me to come back to his fraternity house and spend the night in his bed. No sex, he promised. Just kissing. Just holding. The wine made my world spin pleasantly, and he smelled sexy, a hint of musk and a little sweat left from a basketball pickup game. Before I took my first sip of wine, he told me he had scored 25 points.

I said yes to his room.

I’d told him I was still a virgin, one of the girls who signed the celibacy pledge at church camp in eighth grade and meant it. He’d told me with a solemn face that he wanted his wife to be a virgin. He didn’t say anything about himself.

The first time he asked me out, also the first time he said hello, he slid an arm across my shoulder and walked me across campus as if he already owned that right. Sometimes I picture that moment, my face turned up to his, eager, a puppy, a lamb, a foolish girl. I want to slap her.

I was decently popular in high school but not material for the Pierce Martins of the world. So when Pierce—funny, smart, rich, frat-boy Pierce—picked me out of at least fifty other girls in my college economics class, intoxication seeped its way into every insecure crack. He wasn’t looking for the test answers for next Tuesday from the girl who scored 103 on the last quiz. He wanted the other me.

As soon as I stepped inside his room that night, it began to feel weird. The lights were off. Pierce’s roommate lay sleeping across the top bunk, a long, dark lump, his face to the wall. Pierce had introduced him to me once, briefly, in the cafeteria. He was a legacy forced on the fraternity, a skinny freshman with random red splotches on his face from squeezing pimples, which he clearly despaired about when alone with the bathroom mirror. Pierce chose him for a little brother so he could abuse him the rest of the semester as a personal slave. He washed Pierce’s dirty underwear, fetched Pierce’s take-out, lied to Pierce’s mother on the phone.

It seemed funny, before the rape. How easily I lost my center.

“It’s OK,” Pierce assured me. “He won’t care. He’s a deep sleeper. Like in a tomb. Nothing wakes him.” I crawled hastily into the bottom bunk, suddenly wishing I hadn’t chosen a skirt over the pants I slid off at the last minute. I’d stay half an hour, tops, I decided, then say goodnight.

Lying flat in that dark cave, staring up at the bed springs, I didn’t realize Pierce had stripped to a T-shirt and boxers until he pushed his body against mine and swirled his warm tongue in my ear. Still, I thought: This will be OK. Kissing. Maybe even a little more.

I sank into him. I was butter melting along the path of nomadic, expert hands. His tongue roved lower, a friendly snake. I didn’t want it to stop.

Minutes later, he slipped cool fingers up my skirt and yanked my underwear down. His nails raked the side of my legs, leaving a red scratch I’d find the next day.

I said it as urgently as I could, leg stinging, my brain flipped back on like he’d thrown a switch. My voice was soft, not wanting to wake his roommate. Not wanting to humiliate any of us. I was still hopeful.

Those were my last words to Pierce Martin.

“You’re a tease.” He clapped his hand over my mouth and flipped me over. “He’s done this before,” I thought, struggling a little, still sure I’d get away, still trying not to wake his roommate, still wanting to limit my embarrassment. The roommate had an unfortunate name straight out of a historical romance. Pierce made fun of it. Wheaton. No, Haywood. That was it.

Pierce gripped my hair and yanked my head backward, pain ripping through my skull. His lips brushed my ear like a lover’s. The whisper floated into my ear, down the dark tunnel to my brain, settling inside me.

The night with Pierce wasn’t a fork in the road of my life because I didn’t get to pick which way to go. More like a screeching U-turn.

I’m thirty-two years old. Up to this point, I’ve told only four people about that night: the campus police officer on duty at 3 a.m., a bored woman who put down her pen and said I’d never be able to prove it; Rosemary Jansen, my roommate that semester, who I don’t even exchange Christmas cards with; and my parents, who are no longer alive.

I still consider the rape a secret, but we all know there are really no secrets.

All of us walk around with ridiculous amounts of intimate information about strangers and acquaintances. We’d never get out of bed if we realized how much peripheral people in our lives know about us. What even the people we love most say behind our backs. The number of confidences broken.

A co-worker, a person named Anne who I barely know, is the sister of a woman married to one of New York’s senators. Anne told me once over a happy hour that her sister keeps a private apartment in San Francisco for her lover. The senator, her husband, doesn’t know.

Just a stray fact, a fragment of conversation that disappeared from her mind into the next tequila shot.

The senator is a regular on primetime news shows, and now every time I see him interviewed, I think, “You’re famous. I’ve never met you. I’ve never met your wife. Our lives haven’t touched. But I know this thing that could blow up your world.”

I wonder about the people on the periphery of my secret. My parents probably told Father Joe about the rape as they sought counsel from our family priest to help me. I’m sure Pierce bragged about that night to his fraternity brothers, who in turn told their girlfriends, who in turn will use my story someday as a cautionary tale for their daughters.

I imagine my old roommate Rosemary bringing me up as a personal example of being touched by rape. “That happened to my college roommate,” she might say at a party of fellow suburbanites. “I tried to get her to turn him in, call the frat board, anything, but she wouldn’t. She thought it was her fault.”

It was my fault. I don’t care what a court of law says about the word no or my polite “please don’t.” I laid myself down in that bed. I was naïve, stupid, shallow, flashing my virginity around like it somehow made me better. A prize somebody could win.

Haywood might still be keeping my secret because it was his, too. That night, Pierce branded us both with humiliation and guilt, the kind that embeds in your skin like a tick and spreads disease.

When my mind travels back there, the shame flares up from the embers, licking at my soul until I find myself flushed and kneeling over the toilet. So I’ve worked at not thinking about it.

Until Clairmont, Texas. This small dot on the map, thousands of miles away from where my story began, is the place that my past and present exploded.

My mother believed that fate is a compass inside us. If she hadn’t met my father in college, she said, she would have found him somewhere else along the way. We choose our steps, she insisted, but they always take us to the place we’re meant to go.

I don’t know how she could reconcile such loosey-goosey mysticism with her belief in Catholicism, especially if she’d known how she and Dad were going to die.

If you follow her theory, we are responsible for running dead-on into the evil as well as the good.

Misty and Caroline turned out to be both. Good and evil.

My kindred spirits and my tormentors.

They were the catalysts to free my soul.

But their secrets almost killed me.

Return to the Lie Still page